Production Reviews and Photos
For a complete acting resume or headshot, contact me


"...Lauren Shell's Rosalind promises something fresh when she occasionally stills the romping to deliver a wry observation. And that promise is realized in the Deauville scene from Noel Coward's 'Private Lives' when, as Sybil, her lines are beautifully clear and cool and funny."
~ Pam and John Rooks, Florence News Journal

"Lauren Melody Shell stands out as the strong-willed Rosalind. She easily exchanges her 1950s-style skirt and feminine personality for the austere garb and boyish mannerisms of her alter ego, Ganymede, but never once loses her charm or appeal. It is upon her that the play relies for momentum with Orlando, and Shell delivers in spades with an energetic, yet thoughtful performance."
~Charles Culbertson, Staunton Newsleader 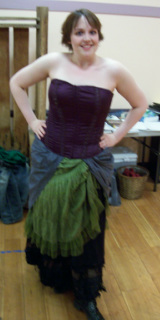 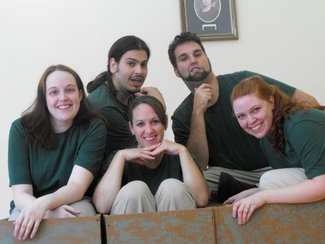 Hansel, Momma, and the Bat in Lost in the Woods
Golden Duck Productions Touring Company, Summer 2008

"...Lauren Shell, a first-time performer with Golden Duck, won my best actress award. Out of all the performers, all of whom played multiple roles, I found her characters to be the most distinct and detailed in performance without being too
stereotyped."

"'She seems to have the right attitude for every aspect of the
role she is playing.'"
~Chantal Racheau, The News Gazette 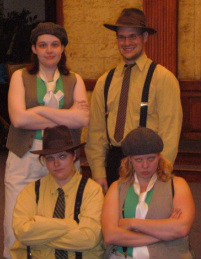 Dromio of Ephesus and Syracuse in
The Comedy of Errors
Lord Frank and Ralph's Men Touring Company, Summer 2007